“We’re all in… Looks like we have some planning to do…”  email from Carly Koerner after Way too Cool and Miwok lottery, December 2010.

Way Too Cool 50k is for many (600+ runners) the first ultra of the season.  For me it was such, but it was also my first ultra since well, forever it seemed like.  Real time translation: first ultra since November 2009 having been pregnant since December 2009 and then this whole having a child thing which easily added on 5 months of digging out a cave of sleep deprivation, plus moving, new jobs and lots and lots of diapers.  Correction:  sleep deprivation continues, but somehow we are figuring out how to function.

The weekend started early and good friends, Hal and Carly Koerner took advantage of the impending ultra to swing through Reno to come visit us and meet little Eva.   24 hours later, we were on the road to Auburn and Eva was settling in for her first night at Grandma’s house…

After all the classic pre-race details- bib pickup at Auburn Running Company, dinner with the Oregon crew at Il Fornaio, and manic kit preparation by all, it was time to sleep.   Sleep should be easy when you don’t have to worry about your 5 1/2 month old several times a night, but for me it was not.  I still thought about her lots.  I saw a glowing 11:15pm on the clock which prompted me to go on the search for the Ambien I somehow knew I would need. 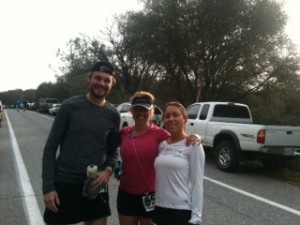 Finally, morning came and the four of us managed to hit Starbucks for our caffeine needs and arrive on time to a very busy Cool parking lot.  JB, suffering bruised ribs and a shoulder injury from a snowboard crash the weekend before was not sure how the day would shake out for him.  Carly, with  lots of race miles on the legs and battling illness, also felt out of sorts.  Hal, having just destroyed his own 100PR at Rocky Raccoon a month before was all smiles and jokes like usual. Then there was me… I felt ready, I felt happy to be part of the running community I loved so much, but was I really ready to re-enter ultraville ? We all toasted our Americano’s and headed to the start line to see what would play out. 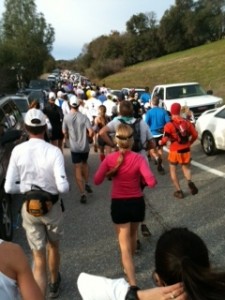 Amongst a sea of runners

The new course was fast and pretty sweet, albeit lots of mud and wet feet for the duration of the run.  The race pretty much broke down into two sections for me.  Miles 1-26 and then 26-31.  For the first 26 miles, I felt pretty damn good.  I kept thinking about how awesome it was to be running and how fast time had gone by since the last Way too Cool I ran, over 3 years ago.  My leg speed was  decent and other than my ipod dying at mile 2, I didn’t have any mental blips or major physical issues, minus that left hamstring tightness that has continued to plague me since 2009.  That’s when I, head down and plodding along, went right past the uphill turn for Goat Hill aid station.  I took 3 runners with me and after about 5 or so minutes,  ended up near another stream crossing and with 3 possible trails to go on.  After we all chatted about the obvious lack of trail markers in front of us, we heard some whistling and realized someone was trying to tell us of our misstep.  After another 5 or so minutes back to where we left the course and the obvious pink ribbons, a few expletives left my lips and I started the climb to Goat Hill.  Before that point, I was on track for a sub-5 hour finish.  I knew I was and I was determined to get it.  But quickly it hit me that 1) my fitness was not where I wanted it to be at this distance  (shocking I know ,after a whole 6 weeks of training) and 2) I was not going to make my time goal after getting lost.  The rest of the race was a bit of a battle but enjoyable nonetheless.

I crossed the line in 5:10, which was a minute slower than my last finish at this race, 3 years ago.  Admittedly, not horrible for 5.5 months post-partum.   It was good to understand where I need to work and what my demons will be for the year.   Left hamstring tightness, check.  Overinflated breasts from needing to feed my infant, check.  Work on hill climbing, check.   Yep, the usual stuff. 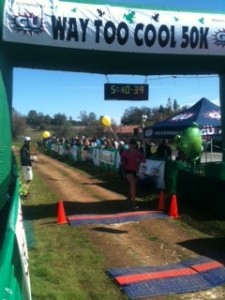 Oh and one other great piece of information I learned- moms who are ultrarunners do not get recovery days.  Yeah, you know the sleep that you so desperately need after running around the woods for 5 hours. Well my little girl didn’t understand that when I put her down for the night- “Now Eva,  mommy really needs to sleep tonight, so maybe you can too…”  The second lesson is that nothing is the same now, and no expectations should be set.  Its all a crap shoot, which I love. My priorities are totally different.  I love running, but I love my little lady and so there you go.

Thanks to Hal and Carly for a fun weekend and for all the laughs… BOY-EEEEE! 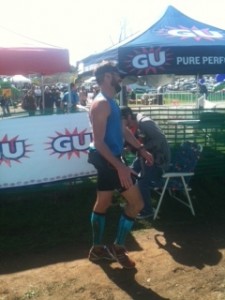 Here in Reno we have been hit with 2 major snow storms in the last 10 days.  Our house, which sits at 5600ft, is almost the altitude of Lake Tahoe… oh the snow.  Last Friday we saw a total accumulation of about 1.5 feet and we thought that was bad.  Wake up on Saturday morning and another 1.5 feet fell.  I call that an official snow day. We could not dig out or leave the house.  My lovely trails were covered.  I had planned on doing a 20 miler on Saturday.   It occured to me that I could go dig out the old snowshoes and attempt a long run/hike in them or two, get my butt on the treadmill and just burn it.

I opted for the latter and decided to make the best of it.  I put my laptop on the top of my armoire that faces my treadmill.  I wanted to watch a movie and considered several choices.  Do I watch a comedy like the “Hangover,” for the hundreth time? Do I go with a cute chic flick like “Sex and the City?”  Or maybe I pick an inspiring running movie like “The Runner.”  After a good ten minutes of weighing my options,  I chose  “Lord of the Rings Return of the King,” as I considered the shear length of the film, the fact that I could watch Hobbits miserable journey to  Mordor and of course Viggo Mortensen never hurts.  I was so pumped on this idea, I almost made some popcorn to snack on.

So the running began.  I decided just hit it fast and get it done with and throw in a few hills for fun.  I had done some decent hill work that week and really needed to work on my leg turnover and speed.  Its amazing what gains you can see when you start to get out of slow mode.  Speed work is my new best friend because thats what I lost the most during my little 9 month break.

I was mezmerized by how much I loved having that time to just zone out and watch a movie.  As a new parent, movie watching is pretty rare and much appreciated.  At the 9 mile mark, I just paused the treadmill, nursed Eva and got some more water.  At the 12 mile mark I made an almond butter and jelly sandwhich.  At the 14 mile mark I put the wet clothes in the dryer and started another load of wash.  Yep, this multitasking, movie-watching treadmill was pretty rediculous but I got so much done! 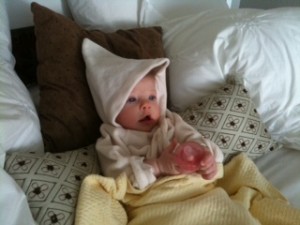 My own little Hobbit watching her silly Momma run

Well, I would take trails over the dreadmill anyday. But, I got to at least run a bit and not totally call it a snow day.