Bandera 50K, Some may call it a Hoka-mance.

After a quick evaluation of my year’s plans and a frank conversation or two with a friend and the hubby, the decision to drop down to the 50k was an easy one.  That was, until we got to the race check in at Bandera and I found myself deep in thought.  Should I just buck up and run the 100k cause I need the miles? What is the definition of need?  New Year’s resolutions aren’t going to last if you can’t even make it past January.  And with that, I shuffled bibs and packets and chip timing anklets and it was done.  I got to catch up with my relatively unknown Hoka teammate Karl Meltzer.  I know, you probably haven’t heard of him, but I hear he’s gonna be a big star.  Keep your eyes out for him.  After a Go Team Hoka cheer and secret handshake,  we departed the registration area. 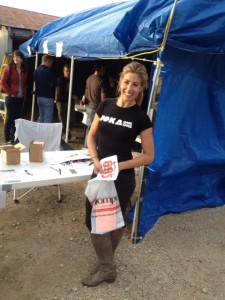 Eventually JB and I found our hotel at a Dude Ranch just near Bandera, called the Flying L Ranch.  We opted out of the “dude’ amenities- i.e, horseback riding, the 10lb breakfast plate buffet and cowboy karaoke, and just took the room.  With bunk beds that would have made Eva very happy and a copper sink to boot, it was a nice little place to stay.  With a very civil race start time of 7:30, we set the alarm for 6am and slept away under rainy Texas skies. 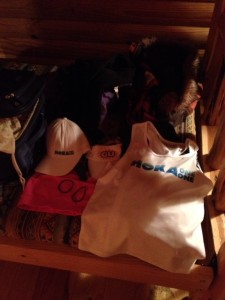 Tip#1 lay out your race kit night before. Works like a charm

Morning proved a gloomy, foggy and drizzly start to the day.  One thought came to mind: mud.  An otherwise, rocky, slippery course without rain, was now going to have a little extra challenge added in.  Most remarkably however, was that, over a 1000 people filed into the start area- many were running the 25K, about 300 were in the 50K, and maybe 200 were running the 100k.  JB and I were running late, as usual, and mostly by design.  I hate getting to races too early, standing around, looking at my garmin over and over and over.  So we threw the keys down near our rental car, and ran to the start, where Timothy Olson and I got a chance to jog a warmup. I then got to say hello to fellow runner Denise Bourassa and  proceeded to give my hubby a happy anniversary kiss and good luck hug. I might have smacked his butt for a little extra go. Apologies for all the PDA.

Then we were off.  Denise burned out of the start and I wasn’t too far behind.  I have tons of respect for her as a great ultrarunner and also a really nice person.  I knew she and I would race a bit and it could be anybody’s day.  After about a mile into the race and some pretty steep climbs, I found myself right on her heels and  in that moment, I just felt good and decided I would go ahead. It was an aggressive pace on the climb, and I thought I would calm it down and just stay within myself and it would be however it was supposed to be.

The trails were sticky clay, with lots of slippery rock unfolding to thicker mud that was accumulating fast.  It would only get worse as the humidity was saturating the air and the drizzly effect just made everything wet.  The sotol cactus would sting my quads and leave streams of blood running down my legs.  It looked awesome and so dramatic.  Actual race photos show me appearing to be a drowned rat with a muss of tangled, wet hair. Solutions for long tangled hair, ladies? Anyway, a shower that night would reveal some pretty good quad carnage from the cactus alone.

Aid station after aid station and the miles kept coming quickly.  About mile 20, I hit my first bad patch.  I was putting in so much effort to run a speedy pace, but the mud added several pounds to each leg. Good, I thought- I was glad I skipped my weight lifting routine that morning.   The sliding, slipping and slogging were tiring the legs out pretty good.  I remember forcing in about 3 GU vanilla gels in about 30 minutes to give myself as many calories as I could.  I raced the whole 50K on about 10-11 GU’s and nothing else but maybe a swig of Red Bull at mile 25.   I kept glancing at my garmin and not understanding how I could be running so slow.  My initial thought was about a 4:30 for the course but it wasn’t adding up that day and so I covered my watch up and stopped trying to make sense of the slogging.

I kept getting reports along the way that JB was racing well and was in 3rd place.  So to my surprise, I was shocked to see him at mile 23 walking down the trail.  It was our 11th wedding anniversary that very day.  And probably near that very moment we exchanged our vows in a lovely little chapel that was once part of the high school we attended, with sun glowing behind the stained glass. I guess you don’t forget those things.  For better, for worse, and here we were, so many years and so many miles later, suffering to some degree to make it to the finish.  Oh the irony.  The I loves you were exchanged and tears started flowing when I passed him.  I had to shut it out of my mind to keep from hyperventilating.  I had more motivation than ever to try to pull out this win. 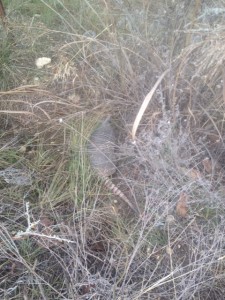 And so I did.  The last 3 miles hurt real good.  4:58 and 7th place overall.  I got a real nice roadrunner that now sits in Eva’s room-she calls it Mommy’s rooster.  JB came in about 15 minutes later and then Denise a few minutes after that.  I hugged everybody with sweaty, muddy hands and arms and called it a day.  Joe Prusaitis puts on a fine, fine race.  JB, Timothy (men’s winner in 4:18) and I sat around drinking wine and watching the 100k runners come in.  A very impressive run by Sage Canaday with an 8:13 and new CR. Hoka teammate Dave Mackey took 2nd and Karl took 4th with a beer in hand- he’s a freak as he will tell you.  Super proud of the team’s efforts that day.  Tough conditions play to our strengths no doubt.

More than anything, I was so happy to have a moment with my hubby and a day that I won’t soon forget. 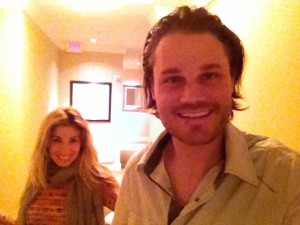 Headed out on the town to celebrate