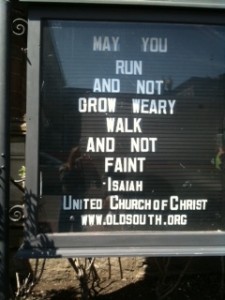 JB, Eva and I hopped on a plane that would take us to Boston (via Denver) on Thursday late afternoon.  The plan was to get to Boston, enjoy the city, run the marathon and then fly to Palm Springs the day after the run for a yearly family gathering in the desert and more training.   Oh it seemed so simple when we talked about it.  We’re crazy like that.  We are claiming rookie parents all the way.  About two days before we left, it dawned on me- we are going to have only two seats with a very active child to pass back and forth on our lap and no where to move about. What if she starts crying unconsolably.  What happens if she blows out her diaper.  What if she insists on using her little toy hammer on the passenger in front of us.  Instantly, I started tearing around my office looking for solace-  10 minutes later I breathed a sigh of relief upon spotting those free drink coupons that I had gotten from Southwest airlines.  Once I found them and put them away for safe keeping, I realized we would be okay.   I then proceeded to gather about 7  one gallon freezer bags and find every cool toy in the house to put in them.  That and diapers, food, snacks, clothes,pacifiers, teething cookies ect., ect., ect.  The outbound flight to Boston went incredibly well.  Eva in essence helped “upgrade” our entire travel situation.  The flight attendants felt sorry for us and gave us three seats and a mighty strong gin and tonic.  The hotel decided we needed a bigger room with a view of the harbor to accomodate the kiddo and her crib.  Now if only the Maybach would have been on time to pick us up from the airport.  Well, you can’t have it all, I suppose. 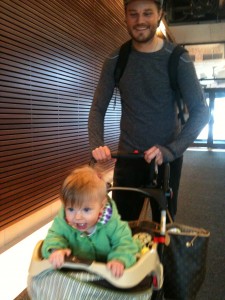 On our way to the convention center to pick up our race packets and bibs, we found a lonely stranger by the exit of the subway.  The curly hair, the Brooks jacket, the Amy’s burrito in hand… yep, I knew this guy.  Scott Jurek raised his head from the furious text conversation he was having and smiled. In town for some “Born to Run” talks with Chris McDougal, he walked with us to the convention center and that’s when we realized we were in a runner’s den.  Every 2 minutes we had to pause to let some stranger introduce themself to Scott and take a picture with him.  After the convention center hoopla and fanfare, the four of us got a yummy vegan meal and said our goodbyes.  The baby was getting tired and the weather was getting cooler and breezy.

The following day JB, Eva and I went to Fenway park and took in a Red Sox game.  It was the coolest thing ever- quite literaly, I could see my breath and bungled Eva up in as many layers as possible.  We had seats right behind home plate and watched Dustin Pedroia hit a home run.  What a great way to spend a Saturday. 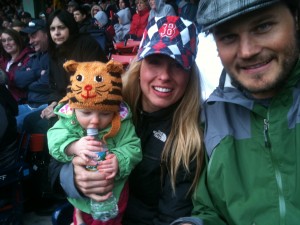 Sunday was a day of shaking the legs out with a little 5 mile run and eating yummy cannoli’s and fresh apple pastry from Mike’s Pastry in North End.  After a few bites of the pastry, I knew that this was why I run- to eat dessert.   Carb loading is not hard to do in Boston.

The morning of the race, JB and I kissed Eva goodbye and left her with her cousin who happens to live in Boston and a babysitter and off we went to board the buses to get to Athlete’s village.  I was much more nervous about leaving Eva than I was about the run. I even insisted JB run with his phone just in case. 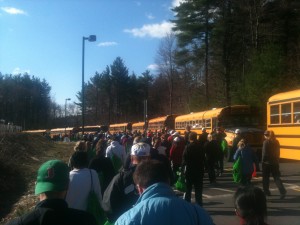 The train of yellow school buses driving out to Hopkinton was something to remember. I would say the majority of the 27,000 runners use this transportation method to get out to the start. While on the bus, a nice British guy leaned over and said, “Feels a bit like we are waiting on death row, doesn’t it?”  We laughed for a while on that comment alone. 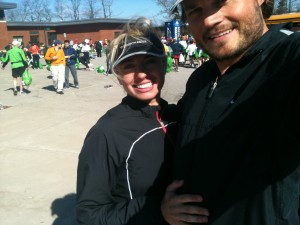 See you at the finish!

The organization of this race is the best I have ever seen. Tents, bathrooms, bagels and waters for the runners… I guess they have been doing it a while, but it was appreciated.  JB was in the first wave that started at 10:00am, since his B.Q. was sub-3.  I, on the other hand, was in the slow group, wave-2 which started 20 minutes later.  JB said goodbye and went to walk the .7 miles to the start corrals, while I lugged around my very necessary breastpump and went and hovered around a corner to get rid of unnecessary weight.  I think you will notice this is a constant issue for me at every run- just wait till you hear about my pumping plan for Miwok.  Watch out fellow runners, I can only warn you about my pumping on the run strategy. 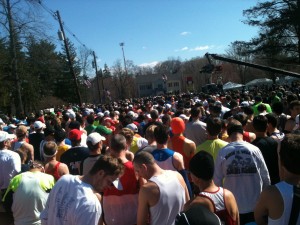 After checking my bags at the buses, I too went and lined up.  I took a Vespa and a vanilla Gu and gulped them both down.  With only 2 minutes to spare, I made it into my corral and off we went.  Walking at first and then a slow shuffle and 6 minutes later we finally reached the timed start line where a sea of people hit “start” on their GPS watches.   Instantly I took in what the Boston marathon is known for- the amazing crowds of people and a downhill start on narrow streets.  Now here’s where I screwed up my race plan and let other people freak me out: “Don’t go out too fast at Boston or you will pay for it later in the race.”  Ok, I am an ultrarunner that runs hills every day.  I am not a road marathoner with untrained downhill legs.  Despite knowing myself,  I started relatively easy for the first 5 miles and downhill section.   Why I didn’t push it hard the way I like to run the downhills is beyond me.   So after finding a rythym and a groove, I basically tried to keep my pace at a comfortable 7:50 minute mile for pretty much the whole run, give or take on some miles.  I was having a blast considering how I really don’t like road marathons and I focused on enjoying the scenery, the costumes, the crowds cheering and the energy.   I felt myself slowing down on a few of the uphills near mile 17 and near mile 21.  I can’t even tell you what Heartbreak hill is, because I though it was the larger hill at mile 17 … who knows.  What I do know is that generally speaking I felt really great throughout the entire race but couldn’t push much more speed into my legs near the end when I wanted to.  Coupling the legs that wouldn’t turn over any faster and a bit of a longer than 26.2 mile course and well, there went my goal time of 3:25.  I crossed the line in 3:29 and was okay with it. People were buzzing at the finish line with word that the world record had been broken by Geoffery Mutai from Kenyan just a bit earlier.  It was so thrilling to be there that day with that record breaking run.  Also, major cheers to the two USA women runners-Desiree Davilla, who nearly won and Kara Goucher who also is a new mom as our babies were just born just one day apart.

The main focus here was to use Boston to work on getting speed back into my legs overall.  Speed is what I lost the most while taking last year off.  JB gave me solid advice and told me to make my easy pace or recovery pace faster for every run.  I did that and then encorporated a few more focused speed workouts after Way Too Cool. After Boston we turned right around in Palm springs and ran another hilly 20 miler, to prep for the longer and hillier Miwok 100k.

Boston also served to give me a base fitness test going into May and June which are my peak training months leading into Tahoe Rim Trail 100 in July.  I am feeling more fit and able to handle more volume which is all I can ask for, especially with still very little sleep and lots of work!

Next up is Miwok in less than two weeks.  Woohoo!