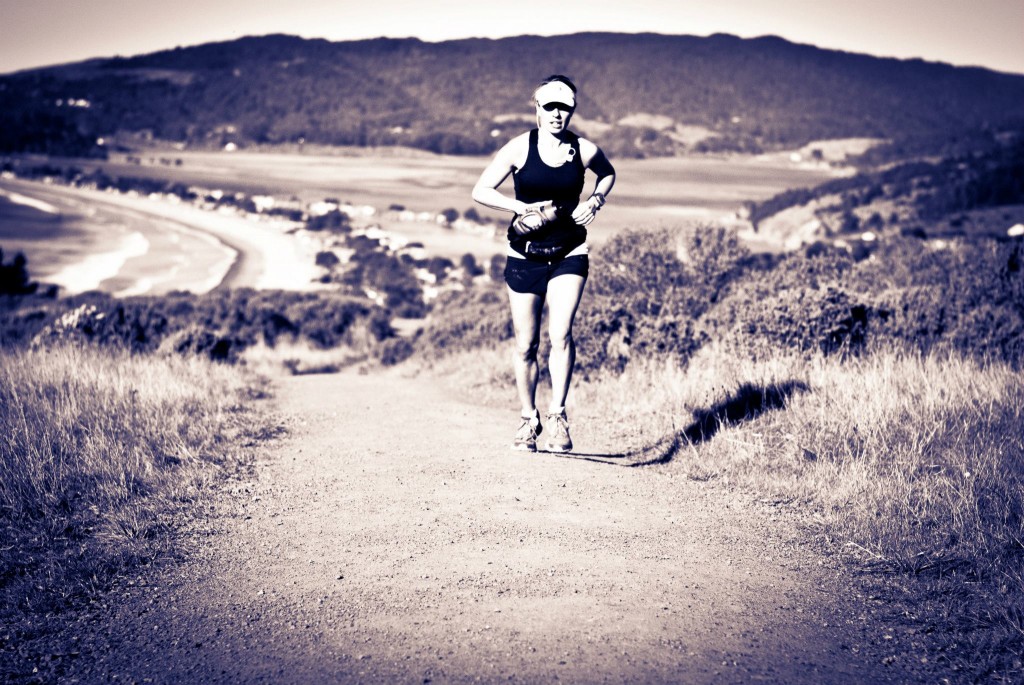 I can say that I did race my heart out, but the conditions leading into race day were far from ideal. Training was very lackluster after Firetrails 50, mostly due to my continual battle with a cold or flu or both. I kept losing bits of weight due to low appetite, wasn’t too motivated to push hard on workouts and felt pretty tired for days at a time. Our bodies take stress, whether it be high mileage or life stress, the same way and the result is a classic example of overtraining syndrome. I took a few days off – some by choice and some by default due to the “Unbreakable” film work or my own real job or of course because Eva needed me, which ultimately trumps everything. I got in a few good training runs of 10-20 miles, but not the hard push I was hoping to give week after week to prepare. So I threw my hands in the air and just decided that I had one thing going for me- mental toughness. I would race this 50 on whatever I could muster from legs and then my mind would take over from there. I am not a professional athlete, but I am an athlete, a mommy and a wife. I cannot train 6-8 hours a day like Anna Frost who I have such a great respect for. She did a great job of working her tail off to get ready for TNF50.  I hope to learn how to push training even harder while balancing my crazy life.  That’s not a complaint, its just a fact and I bet one that many people can relate to. AJW talks very eloquently on life/running balance here.

The night before the race, and ultimately weeks and months before the race, all efforts went into the “Unbreakable: The Western States 100″ film premiere. I will blog about the film separately as it deserves its own platform. The film showing at the Presidio Sports Basement was a huge success and I was astounded at the audience cheering and clapping. Over 360 people were in attendance with about 100 others turned away due to capacity limits. I was beyond proud of JB, who really poured his heart and soul into making this film. I know I am biased, of course, but I really think its one of the best running films I’ve ever seen. As JB said the night of the premiere, “I really wanted to watch this film, so I had to make it.”

Maybe 4 hours of sleep later, it was race morning. High winds and cool temps greeted us all and off we went into darkness. The trails were dry, although strewn with debris from the wind storms. So extra focus was needed not to fall and during the descent into Tennessee Valley, I watched a runner fall really hard onto his head and hands, blood everywhere. Turns out he was okay, but shaken. People were running mad crazy fast those first 13 miles. Once I had a moment and looked at my garmin, I realized I had 13 miles in about 107 minutes . It was furious but fun and so far all systems were firing well, no issues brewing.

The day unfolded fairly consistenly, with two main sections of darkness for me- 1)the climb up to cardiac the first time was slower than I had wanted and I didn’t have any power and 2)the climb out of Muir beach at mile 42 was painfully slow and with little more than a power hike. Other than that I tried to focus on patience, fueling and being in the moment. I never really had any horribly bad patches and actually the day went by pretty quickly- mostly due to some stellar pacing company….

My saving grace during the day was Jimmy Dean Freeman, picking me up as my pacer outside of Stinson Beach up the Dipsea trail where we proceeded to reel in about 4 women with stellar running resumes over the course of the next 20+ miles. I took energy from the time I was gaining as I am always a second half runner. I was pumped to have Jimmy as my light throught the forest and with such positive energy. He even forgot about himself- quite literally running most of th0se 22 miles without food or water. He always knew what to say and when to tell me to push. Thank you Jimmy Dean.

The race was amazing and I was happy to see one of the most clear, glorious days ever in the Marin Headlands that I could remember. It was certainly the most competitive race I have ever been fortunate enough to partake in. I really loved it. I placed 10th in 8:34. Anna Frost won in 6:56- which is just astounding.

I have learned so much this year, its amazing to me. Its so inspiring to watch both your friends and people you don’t know well, run a great race. In the end, professionals or not, its all about running hard in beautiful places with one another. The ultra running community is the best around. Humble, amazing and friendly athletes kicking up some dirt with one another is always a good day.

Now, its a full push on the work front and being a mom to Eva. I will take a few weeks off of running as I always do at the end of the year to reset for next year. I hope to get into Western States and then make my race plans around that. We shall see, the lottery is next week!


Wow, great run! Congrats on such an awesome performance. Good luck in the WS lottery, I hope you get in!!


Awesome job, Jen! To finish top ten in such a talented field is really something to be proud of. I love running on those trails out there

Saw your name on the list for States. Yay!! Let’s do some running this winer together, okay?