Pandora’s Race: Signing up to run 100 Miles, A Synchro-blog

” I feel awful. No, Joe, you don’t understand.” Even though I knew he did understand, having finished the Wasatch 100 the prior year. “This doesn’t seem right, I’m hurting too much. I will never, ever do this again.” I said in between coughing fits as my pacer Joe Lane and I trudged down the last few dusty miles of the 2008 Tahoe Rim Trail 100. Joe had hiked thousands of miles with JB on the PCT and was tough as nails. An ultrarunner, climber, mountain man. I was falling apart before his eyes. I was so raw, that I was almost embarassed at my state. It wasn’t pretty. But there he was along side me, not judging me. He graciously volunteered to pace me on the second 50 of my first 100. Despite me vocalizing my own pity party and self loathing state, Joe wasn’t having a word of it. I wanted to quit. He wanted me to watch the sun rise. I wanted to vomit, he insisted I try some ginger. I was hallucinating that trees were in fact, the legs of giant deer. I could go on and on. The point being, I went to places I never knew existed inside my head. But I also got out of them and kept putting one foot in front of the other. I told Joe he was like my trail angel that day. When I insisted I couldn’t do this again, he said, “No way, Jen! You are going to be back for this I promise.” “I can assure you Joe, I won’t.” was the last thing I remembered saying as we rounded the corner into Spooner Lake. But as time would tell, Joe being the wiser of the two, knew the magic of 100 mile runs gets in your blood.

And so it began. Of Loving so deeply the run and hating so briefly the pain. Of Training and racing and recovering and repeating . Sometimes even smiling through the suffering, if just to minimize a tough day out there. Let’s just say you have been warned. You might get addicted. You, too, are opening pandora’s box. No cure for this disease, so proceed cautiously.

I was always told I was not an ultrarunner until I ran 100 miles. Now, I am not sure I agree about that. Each distance is special in its own right. But nonetheless, a 100 mile run is indeed a journey. I don’t think there is anything particularly healthy about running 100 miles. But, something quite strange happens the absolute second my feet cross the finish line. I forget about any pain I was just in moments before. My heart, my breath, my mind all sync up and I can begin to revel in the mystique of the distance, the glow that seems to envelope my being, the pure animal instinct of running. A sense of competition, of chasing, hunting, of surviving. You, in essence, strip away life’s nonsense one mile at a time. You see mountains, water, food for what it is. For those hours on the trail, you are, you purified.

In a pragmatic sort of way, I have yet to nail a 100 mile race. I am a totally different runner at mile 90 than I am at mile 65. I don’t call myself an experienced 100 mile runner yet. I think in maybe a few more races I might understand how to smile more at the end of the race and to keep the fight alive in my head when all body systems are red lighting. So maybe that’s what keeps me coming back. I want to have that one race where I figure it out, keep the suffering to a minimum and say out loud, to those around me at mile 99, “I can’t wait to do this again.”

Though I, like, so many other ultrarunners are complex people with careers, children, and responsibilities, I find the community that surrounds the 100 mile distance as a big part of how I define myself, my life. So many occasions, friendships and life events are marked around a race. I think back and can remember how I marked the 7th month of pregnancy with Eva, by crewing at Western States in 2010. Or, how in 2009 I celebrated my 30th birthday by running Cascade Crest 100 in Washington, complete with birthday cake on the trail. Even months later, I still feel a strong sadness that comes from having to DNF Western States this year due to a myriad of illness, both my daughter’s and my own. 100 miles seems to symbolize a full cycle of life. One that we hope to live out in about a day or less.

In the end, and perhaps without so many words, running 100 miles is something you can’t really ever describe. But you can get out there and experience it for yourself.

The other synchro-blog links.  Such great perspectives: 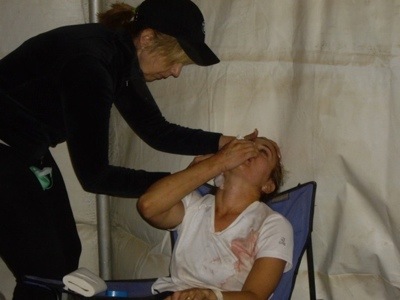 Nice post. This line struck me (as someone who’s ever ran more than a 30k): “I am a totally different runner at mile 90 than I am at mile 65.” It’s a rare group of people who have this self-awareness and leaves me awe-struck as ever about what you are capable of.


Tom!!! Missed you in SF… Thanks for stopping by my lil blog. I am so utterly tech-stupid I haven’t added any FB or Tweet buttons. Maybe JB can help me. Love to you and S.


Your first 100 was TRT ’08? I didn’t realize that – it was mine too! Ah, such memories. I still haven’t had a good race there, although I enjoyed my second finish much more. I think the mystery is exactly what keeps us coming back. We will probably never feel we have the 100 mile distance totally figured out, and that is the beauty of the thing.


Also, congrats on your lottery success today. Yip! I gave a big hoot and holler when they called your name. I’m super happy that you are getting your second chance! I know you will make the most of it.


Hi Gretchen! Thank you so very much!! Yeah I kinda can’t believe that I got in via the lottery. I can’t wait to hear what you have planned this year?? And p.s. I can’t believe we both ran the ’08 edition of TRT100 and just figured that out. That’s why I love this sport- its smaller than you realize.