Cresting the climb at mile 30, was a real defining moment. I had been out of water for about 2 miles and the sun was feeling a bit warm. I looked at my watch and realized, had I stuck to my plan of running the 50k, I would be done by now, maybe a cold beer in hand and my feet propped up. Instead, I was about 5;40ish  into the day and only halfway there, and back of the prized spots 1 and 2 by 30 minutes. I had been in the sufferzone for the better part of the day. I was contemplating what the heck I was doing there.

I figured when I saw JB or Billy or anyone with a car, I would bail at the next aid station. “It wasn’t going to be my day” sort of thoughts circling in my head and let’s be honest, my training would agree with that sentiment. 55 miles a week, 10-12k climbing for 3-4 weeks before the race was minimal training after a month off in December.  I had a ton of intensity built into those weeks and despite feeling quite good, they were intended to be the stepping off point for the year. Not 100k race shape. Koop and I talked about getting ready for a 50k as the training run for my “A” race, Georgia Death Race in mid March.

So here I was, a stubborn old goat, hiking my ass off to get to the 31 mile aid station where I ate orange slices like it was the youth league soccer sidelines from 1987. I must have spent 2 minutes eating oranges. I am pretty sure the guys were going to start pulling them away from me and telling me to save some for the other kids. I then filled up my UD soft flask with what would be the game changer for me: iced flat coca cola. Praise the universe for caffeine.

About 5 miles later, I was beginning to move better and luckily no ride was awaiting me at the next aid station, which meant I had to get to mile 41 where maybe, just maybe I could still find a ride out of this race. But then something happened. My legs began working. At first I thought it was a fluke. But low and behold, I was holding 9 minute miles. Dammit. I can still run and I have absolutely no excuses right now. I saw JB at the top of the climb and he was yelling, and whooping it up. Was I going to walk in and drop with my husband so excited. No, I couldn’t do that. I saw him and he was smiling and fast talking me like it was our first date. “Babe, you are like a minute back from ladies 3 and 4. No one is looking that great honestly.”  Me to him, “Yeah, yeah, yeah… ok, well give me some more coke and let’s see what happens.” 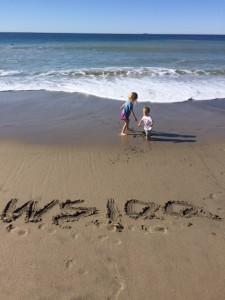 They were sending me signals.

Onward I went- and by that, I mean downward, like 2500 feet to the bottom of this huge descent to then turnaround and climb out 2500 feet in another 5 miles. But this is the stuff I love. The race right in front of me. My body and more importantly, my mind willing to go the distance, to suffer, to see if maybe I could buy 30 seconds a mile from someone.

So I went. I quickly passed Kerrie Wlad, and after we exchanged some similar sentiments about the day, I put in my headphones and just ran. And wouldn’t you know it, Vance Joy’s “Georgia” was blaring on the other end.

Down at the bottom, I saw Devon on her way back. About 7 minutes later, Amelia appeared. I got to the turn around and just saw the 3rd place lady leaving. Well hot damn, it’s still a race. I had no idea if Amelia would fall apart on that climb or what would happen. But again, I had to stay in this.

After some steady hiking to the top of the climb, I realized the amount of coke I had consumed had 1) made me tachycardic and 2) was going to make me puke.  After a quick sideline to clear my stomach, I was back to running into mile 55 aid station where I saw the 3rd place women right in front of me.

I didn’t feel like racing really. I mean- who cares- its not 1st or 2nd, which is what I wanted. So why go destroy my legs to chase down lady #3. And then it occurred to me, what if Devon or Amelia crashes and burns (though highly unlikely) in those last 6 miles or 2) what if one of them doesn’t take a the WS100 golden ticket spot? It could roll down to #3 as it just did in Bandera 100k.

To realize you are pretty cooked, yet you need to run a fast 10k was not an ideal scenario. But so was the entire race. The flip switched in my mind and it was time to look like I was fresh as a freaking daisy.

Within about 1/2 mile of leaving that last aid station, I made the pass. I told Meghan  she was having quite a day- and I was genuinely impressed with her. She’s going to be one to watch for sure.

I put the gas on, despite the “E” reading on the tank. I took in a gel and then another one. I grunted, moaned and breathed my way to 6:00-6:30 minute pace for as long as I could hold it down the hill. I can only imagine what the other 50k and 50mile runners were thinking as I went by them. But I needed to leave it all out on the course today. In the final mile, I was just hoping it was enough and I took one look back and couldn’t see anyone.

I crossed the line, 3rd female, 6th overall, suprised to have bought myself about 5 or 6 minutes and yet it wasn’t enough. Devon and Amelia claimed their spots and had great races, both world class athletes for sure.

I didn’t get what I came for, but instead I got what I needed. Hugs, kisses and a “mommy, you did real good today.”

I also came away with a bit of a flavor for what I can do in the last bit of a race, which was so so exciting. I think that’s why I love running 100 miles… You just never know what will happen in the end.

“Between the idea and the reality, falls the shadow.” TS Elliot 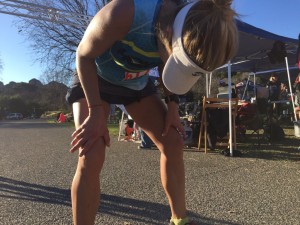