Two days before the race, JB and I motored up to Donner Lake to get settled and meet our friends Hal Koerner (also defending WS champion) and Carly Varner at our Donner Lake Cabin where we were all staying.  Hal and Carly arrived with Qdoba in hand and smiles on their faces after a long drive down from Ashland.  After a glass of wine and plenty of catching up, we all hit the hay to get in a very important night of sleep. 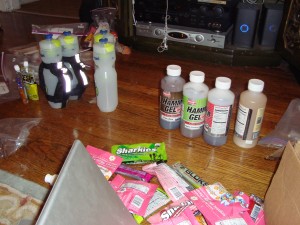 Friday morning Carly and I hit the PCT above Donner  for a nice run while JB and Hal shook out their legs for a shorter run near Donner Lake.  JB forgot to grab his running shorts and instead put on mine for his run- making us all laugh and forget the nerves for a little while. 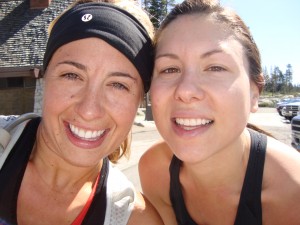 About 11:00am we jumped into the car and headed for Squaw for the pre-race weigh ins, trail briefing and all the folklore that goes with this awesome event.  Carly and I hit Starbucks to get a much needed shot of caffiene while the guys headed over to get in line for the medical check and schwag bag pick up.  The amount of cool goodies the WS runners get is insane- cool Moeben shirts, Polartec fleeces, backpacks, hats with built in headlamps… I thought it was as cool as some of the Sundance events we have been to. 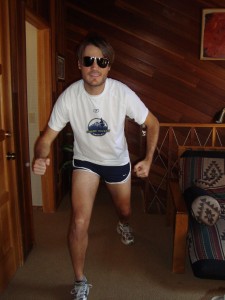 After the hour long trail briefing, JB and I got to talk to our amazing running friends wishing them luck in the big day ahead and then we all  took off to get dinner with the Koerner family in Tahoe City. 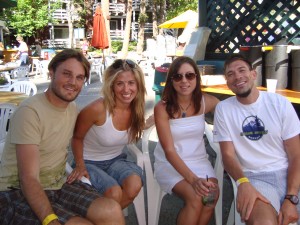 Saturday morning came a bit too early- after a restless night, we finally sat up at 2:45am and ignored the fact that we would both be awake for the next 40+ hours.  After getting oatmeal and bagels into Hal and JB, we set off for Squaw.  The feeling that morning was incredible- the crisp air, the energy radiating off 450 runners, the cameras flashing, the cheering, and then after all the preparations and hard work, the sound of the gun firing at 5:00am.  Watching my friends and my husband take off into the dawn was incredible.  I was just buzzing with the energy around me and I loved being there to see this day get started in such a sureal way. 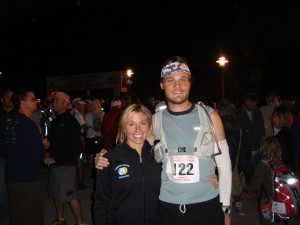 JB and Jen, only a few minutes before the start

I quickly found my dad under the ticking race clock and after we snapped a quick photo, we jumped into the cars to drive the 2 hours to Auburn.  We knew it was going to be a long day, but we had no idea just how exhausting it was really going to be.  After dropping a car at the finish, we jumped into the JF van, stocked up on supplies like ice, water, food, and more ice and off we went to Duncan Canyon, another 1.5 hours away.  Duncan Canyon was the 23 mile mark for the runners and the first crew access point.  When we saw JB  running down the trail, he was pointing his handheld camera at us! He filmed the first 23 miles of his run!  My dad and I laughed  and hollared and continued to focus on getting him refueled and cooled off.  One of the most important things a runner needs is not the food and water a crew provides, but a mental check in and motivating words to get the runner to the next aid station.  We found out how key this was at later points throughout the day. 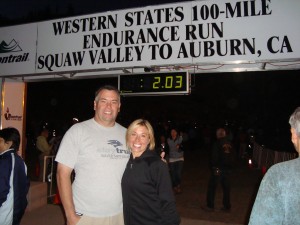 My Dad and I after the start

At mile 38, the Dusty Corners Aid Station, we felt the climbing temperatures and starting discussing new plans to get JB cooled off and fueled up.  I knew he was going to be relying on straight liquid nutrition from this point on.  He arrived around 1:35pm, only 15 minutes off the 24 hour goal.  But he was not feeling great and sat down for a few minutes.  We shoved ice in as many places as his clothes would allow and then the hard part started: the mental conditioning to keep him going.  Watching someone you love suffer is tough. When my mom told me at my first 100 miler that after she pushed me out of aid stations, she would secretly go cry, I was amazed at how difficult it was on my crew. So watching JB I knew how he was feeling and what I needed to say to keep him moving.

At Michigan Bluff, mile 55, everything changed- the 24 hour goal was long gone, runners were dropping like flies from the heat and my dad and I were losing energy. JB came in around 8:15pm- close to the 30 hour cut off and he looked pretty beat up.  I realized my pacing duties needed to start now- not at Foresthill, mile 62.  So after getting JB composed and hydrated, he and I set off into the sunset. Not exactly the most romantic sunset walk we have had, but it was pretty cool for us nonetheless.  My pacing duties were underway and I was ready to kick things up a notch!  The next 45 miles, I became “Nice Pacer or Mean Pacer” depending on what JB needed.  If he was wining- mean pacer came out, or if he was feeling low- the nice pacer encouraged his forward progress.  When you are that physically tired, there is no sugarcoating things.  You strip down the excess and simplicity finds its way to the forefront.

We came into Green Gate, Mile 80 at around 3:30am, well ahead of the cutoff and gaining speed.  JB had caught up to our good friend, Joe Lane, and the three of us sped off after a Red Bull and an Ensure (my favorite combo at 3 am).  The next 20 miles were awesome.  JB was reborn and Joe was running well- so Nice Pacer came back out and stayed!

At Highway 49 with only 6.5 miles to go, I knew they were going to make it!!!  At that point JB and Joe had moved up over 100 spots from Michigan Bluff.  They were hammering and I loved watching the rally happen.  It was good timing too, as the heat of the day was getting going again.  Finally we crested the last climb after No Hands Bridge and we saw our friend, Carly yelling and shouting!! We were shouting back as we were celebrating Hal’s win all night and we couldn’t wait to see them!  The 5 of us (Joe’ s pacer, Brannon included) all ran the last 2 miles down the neighborhood street and into the stadium of Placer High School.  At that point joy was all I could feel and watching JB and Joe cross that line together was amazing.

JB dug deep and finished in 28:19 with temps on the course well over 108 degrees.   Only 238 out of 430 runners finished- a pretty low finish percentage for this race.  All in all, a race never to be forgotten. 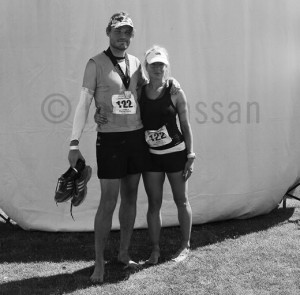